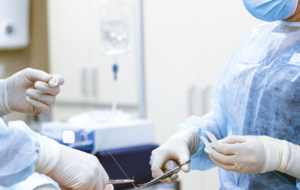 For more than 25 years, health risks associated with surgical smoke exposure have been debated. In 1996, the National Institute for Occupational Safety and Health (NIOSH) confirmed that smoke produced by laser or electrosurgery units may contain toxic vapors, blood fragments, and viruses which subsequently can produce respiratory and eye irritation in health care personnel. Aside from unpleasant odors, surgical smoke has known mutagenic potential. National and international organizations have long recommended the use of smoke evacuation systems; however, adoption of these recommendations has been slow. Data from the NIOSH Health & Safety Practices Survey of Healthcare Workers indicate that only 14% reported evacuating surgical smoke during electrosurgery procedures, and 47% reported use during laser procedures. This webinar will review current research findings, a concept analysis, and a policy analysis on the topic of surgical smoke evacuation to raise awareness and advocate for the use of smoke evacuation systems and respiratory protection for healthcare workers.

Rebecca K. Vortman, DNP, RN, CNOR
Dr. Rebecca Vortman is a Clinical Assistant Professor at the University of Illinois Chicago teaching Doctor of Nursing Practice courses for the Population Health Nursing Science department and serves as a Perioperative Education Consultant. Dr. Vortman has over 10 years of experience in perioperative nursing, education, and leadership. Dr. Vortman is recognized as a national leader through the AORN Forty Under 40 program. Her policy focus is on workplace safety initiatives and surgical smoke evacuation practices. She has disseminated her scholarly work through publications and presentations at the local, regional, and national levels. She received a Doctor of Nursing Practice degree from the University of Illinois Chicago. Her scholarly DNP project evaluated the use of perioperative core-curriculum modules and nurse intent to remain in the operating room. Dr. Vortman is an advocate for surgical smoke evacuation practices and is certified as an operating room nurse (CNOR) through the Competency and Credentialing Institute.

Janet Thorlton, PhD, MS, RN, CNE
Janet Thorlton is a Clinical Associate Professor in the Dept. of Population Health at the University of Illinois College of Nursing. She has received several teaching awards for designing impactful graduate-level health policy courses. Over the past 15 years, she has mentored students and faculty on how to follow a step-by-step process for writing a policy analysis, resulting in multiple publications. She was selected to present Nurses Leading the Way through Innovative Approaches in Health Policy Curricula at a Robert Wood Johnson Foundation Nursing & Health Policy Collaborative. She attended George Mason University’s Washington Health Policy Institute and served as a professional nurse cabinet member for Senator Jim Merritt’s initiative for reducing heroin use in Indiana. Aspects of her research have led to building health policy competency in nursing programs, influencing nurses to work together to advocate and reduce preventable harm from substance misuse, abuse, and errors. Over the past twenty years she has held an active membership in the American Nurses Association and served as an elected delegate to the Illinois Nurses Association National Convention. She is also an active member of Sigma Theta Tau International, the Midwest Nursing Research Society, and the American Nursing Informatics Association.